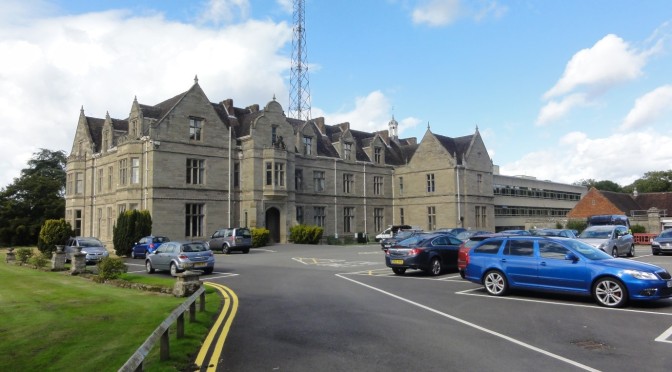 The former headquarters of Warwickshire Police at Leek Wootton is to be marketed for sale, ending seventy years of police occupation.

In August, 1947, the Leamington Spa Courier announced that the executors of the late Sir Wathen Waller had instructed a Birmingham firm of auctioneers to offer for sale the remainder of the Woodcote estate situated at Leek Wootton, between Kenilworth and Warwick. The estate comprised a stone-fronted mansion, surrounded by charming grounds, the Home Farm, woodlands, and a number of cottages extending in all to about 253 acres.

Grade II listed Woodcote House was built in Elizabethan-style in 1861 and extended in 1869 on the site of an earlier house. Designed by John Gibson, it was built in Jacobean style for Henry Christopher Wise. The Wise family once owned Warwick Priory, which was dismantled and removed to America. A member of the Wise family was head gardener to Charles I, a position of some importance.

In 1864, All Saints’ Church, Leek Wootton, was thoroughly repaired and an open roof, the gift of the late Henry Christopher Wise, was erected; there was also a memorial to his three sons. In 1897, carved choir stalls were installed by Lady Waller as a memorial to her husband, the late General Sir George Waller, 3rd Baronet, and a chancel screen was erected in 1930 in memory of Captain Sir Francis Waller, Royal Northumberland Fusiliers, killed in action in 1914.

The Wallers came of fighting stock. One of their ancestors captured the Duke of Orleans, at the Battle of Agincourt in 1415, when Henry V conferred honours upon him.

A house built by a bicycle pioneer that quietly slipped into unfamiliar surroundings. 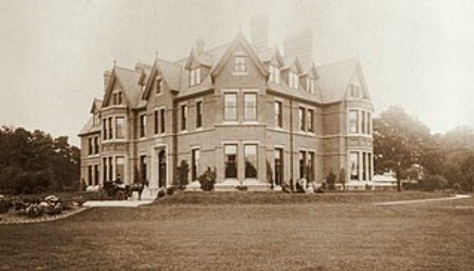 The glory days of Coundon Court, built in 1891 for George Singer by Charles Gray-Hill. (P. Riley).

The death of Mrs Singer at 25, Harley House, Regent’s Park, London, on 3rd March 1918, was insignificant. She was the widow of the late Alderman George Singer, of Coventry, for three years Mayor of the city.  However, for the people of Coventry, she would be remembered for the prominent part in her civic life and her performance as Mayoress during the years, 1891, 1892 and 1893. Mr and Mrs Singer broke new ground in respect of the function of Mayor and Mayoress.

That period saw the beginning on the part of wealthy citizens to live outside the city, and Coundon Court, their mansion, a few miles out of Coventry, was frequently the scene of social gatherings of members of local governing bodies, whilst garden parties were frequently held during the summer months. After the death of her husband in 1909 she left the house behind.

The one hundredth anniversary of her death allows us to investigate Coundon Court, a house that has slowly melted into its surroundings ever since.

Coundon Court was built in 1891 for George Singer by Charles Gray-Hill. It was constructed on land that was once part of Coundon Farm and bought for a modest £5,433.

George Singer was at the top of his game. Born at Stinsford in Dorset in 1847, he served his apprenticeship at John Penn and Sons, marine engineers, Greenwich, and in 1869 moved to Coventry to take charge of sewing-machine production at the Coventry Machinist Company. The company made some of the first bicycles in Britain and it was here that Singer learnt his trade.  A business of his own in Leicester Street was replaced in 1874 by a cycle factory in Canterbury Street, known as Singer and Co, that eventually became one of the world’s biggest cycle manufacturing businesses. Singer paid attention to the smallest detail and his cycles were built with quality in mind.

In 1896 the cycle industry reached its apex. Factories were so busy that even shareholders couldn’t get cycles in less than three months after giving the order. Shares reached great highs and businesses were bought for prodigious sums. Singer and Co was acquired by Mr F. T. Hooley for £540,000 but George Singer still headed the business.

Later he added motor-cycles to his empire and founded the famous Singer Motor Co in 1901, a marque reminiscent of the golden days of British motoring. He was elected to the city council in 1881 but resigned in 1898 to concentrate on philanthropy and charity work. 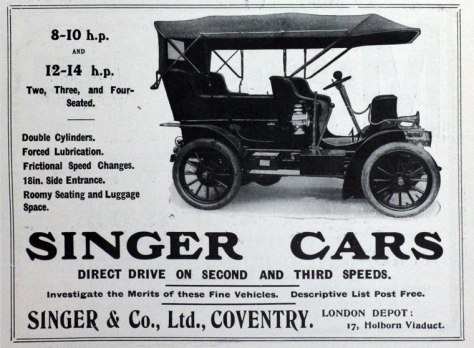 According to the Warwickshire Industrial Archaeology Society the three-storey house of red brick, with incorporated stonework, looked rather severe from the outside. When built it was set in over 50 acres of land complete with three cottages, stables and an impressive gated entrance called Holly Lodge.

In January 1909 George Singer took ill while dining at Coundon Court and died soon after.

Coundon Court was bought by Charles Daniel Miller, chairman and joint managing director of the Newdigate Colliery (1914) Ltd and Bedworth Coal Supply Ltd. Miller had served in the army during World War One and was a noted rifle shot, captaining the English team on occasions, and a regular competitor at Wimbledon and Bisley.  He filled Coundon Court with his many trophies as well as his passion for old engravings, particularly reproductions of George Morland’s paintings. To locals the house became a favourite rendezvous for fetes and summer picnics.

Miller died in 1944 and his wife, Bessie, stayed at Coundon Court until her own death in 1946.

In August 1947 Coundon Court was bought for £15,000 by Mr Harold John Finn and his wife, proprietors of the ‘Sunnyside’ nursing home at Radford. The house was converted into another nursing home with 22 bedrooms available for maternity cases.  It opened to great fanfare in early 1948 and was anticipated to eventually accommodate 44 patients.

The Coundon Maternity Home lasted only a couple of years, probably due to the incorporation of the National Health Service which offered free maternity care to patients. It was obvious that another use was needed for Coundon Court and Harold Finn started taking up to 50 paying guests as long-term boarders.

Finn had ambitions for the parkland and made three applications to Coventry Council to use it as a caravan site. Since 1925 the council had deemed the area as ‘Green Belt’ land and each application was rejected claiming the 13 acres of rich farming land should be used for agricultural purposes. This didn’t deter Finn and in January 1951 he allowed the first caravan onto the property. Within months the number of caravans had reached 65 and the council referred to it as being like a ‘shanty town’. There were no public facilities and after his third application was rejected Mr Finn unsuccessfully appealed to the Minister of Housing and Local Government. It came as no surprise because Coundon Court had gained a notorious reputation for its unruliness and even the odd murder. By 1952 local newspapers were referring to the country house as Coundon Court Hostel.

Mr Finn was frustrated as each attempt to make money came to nothing. However, in November 1952 the Coventry Education Committee suggested they were willing to buy Coundon Court to create a new county secondary school for about 600 children. If Mr Finn thought he was going to make a profit on the deal then he would be disappointed when the house exchanged hands for just £4,000.

The contents, nothing of any value, were sold at auction in April 1953 and the council made plans to build at short notice a new girls’ grammar school for 120 scholars using the house and the addition of temporary buildings. It opened that year and the council later bought the lodge and grounds for sports pitches and gardens. It became a comprehensive school in 1956 and one of its first pupils was Mo Mowlam, later to become the Secretary State for Northern Ireland.

The house still stands, known as ‘Old House’, and much of the original woodwork from Singer’s days remains. The site has been significantly developed and is now known as Coundon Court School.

There are modern-day images of Coundon Court available to see on the Warwickshire Industrial Archaeology Society website.