Like many country houses Adlington had a purpose during wartime. However, the cost of upkeep meant it had to open its doors to the public afterwards.

In August 1942, Adlington Hall the historic home of the Leghs, had been in the possession of the family since 1352, when they first acquired it in the reign of Edward III.

The then-chatelaine, Mrs Cynthia Combermere Legh (1896-1983)  , had turned a large part of the house into a maternity hospital for the wives of servicemen of all ranks, with a staff of skilled nurses and all the modern equipment. It was opened by St. Mary’s Hospitals, Manchester, under the title of ‘St. Mary’s Services Maternity Hospital’.

Wonderful oak-panelled rooms had become wards and nurseries, and inmates of the hospital were able to sit in the Great Hall, where stood the organ on which Handel, when a guest at Adlington, played and composed his music.

The Hall stood on a site that in Saxon times was used as a hunting lodge. After the Norman Conquest it passed to Hugh Lupus, Earl of Chester, and nephew of William the Conqueror.

In the thirteenth century it was granted to the Norman family of De Corona, and it was from their union with the De Leghs of Booth that its occupants were descended.

Successive generations of De Leghs carried out additions and alterations at Adlington, but the Hall still retained its ancient splendour. It was quadrangular in shape, and was in early times surrounded by a moat. The Great Hall was built between 1450 and 1505, and there were additions in typical black-and-white half-timbered Cheshire style, in 1581. Of this, the north-east corner and the east wing still stood, but the remainder had undergone rebuilding. The north front was added about 1600 and was built of dark-red brick; the west wing was rebuilt in 1749 and the south front – in Georgian style – in 1757.

All over England, Scotland and Wales, and for the most part for the same reason (the necessity of providing for upkeep), great mansions were being opened up to the public after the Second World War, and the public was flocking to these places, drawn in part by the rich treasures displayed, and in part perhaps by a natural curiosity to see the background of life as it was lived in the spacious days of privilege.

In April 1950, Adlington Hall became the latest to open its doors. The house is still privately owned by the Legh family and is open to the public for guided tours at advertised times.

Note:-
While staying at Adlington Hall, Handel was inspired to write the Harmonious Blacksmith by hearing the notes from the anvil of the little wayside smithy near the hall.

When the will of Sir Thomas Bland Royden, of Frankby Hall, Cheshire was proved in 1917 it came out at a staggering £1,271,354. The baronet had been Chairman of Thomas Royden and Sons, shipbuilders and ship-owners, of Liverpool. He was a former member of Liverpool City Council, Lord Mayor in 1878-79 and High Sheriff in 1903-04. He had been made a Baronet in 1905.

Frankby Hall, and its 810 acres, had been the home of the Royden family for more than 200 years. The last house had been built in 1846 and following Royden’s death passed to his son, Sir Thomas Royden, 2nd Bt., later to become the first and last Baron Royden of Frankby. He had an even more prestigious career, becoming Chairman of the LMS Railway Company and a director at the Cunard Steam Ship Company, Midland Bank and the Suez Canal. He was largely absent from Frankby Hall and sold the mansion and 61-acres by auction to Wallasey Corporation in 1933. The house was altered to become two chapels for the Wallasey Municipal Cemetery which was created at a cost of £10,000 in its grounds. One chapel was for Church of England and Nonconformist services, and the other was for Roman Catholic services. 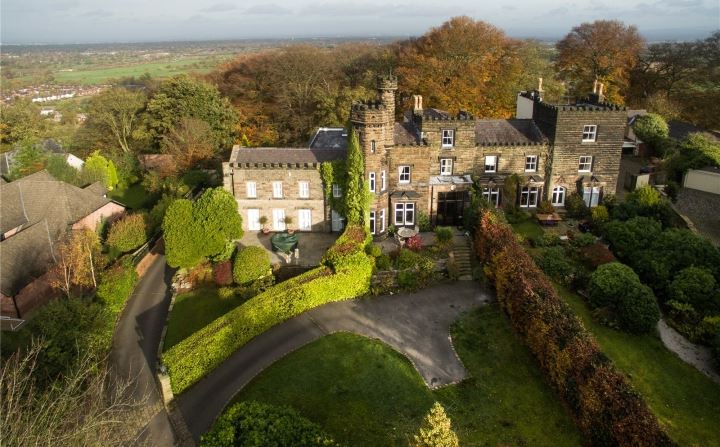 “An octagonal turret displaying the Stanley Coat of Arms with a higher turret corbelled out from its side provides a striking first impression and offers arguably one of the finest views in Cheshire for those who are brave enough to venture to the top.” (Savills)

Bollin Tower is typical of those Victorian country houses that wanted to imitate the castle.  It was constructed with rock-faced sandstone, a Welsh slate roof with four stone chimneys. The walls have now darkened with age and, with its consistent castellation and octagonal towers, can appear dark and menacing. However, the unsymmetrical appearance and 10-bay gabled front adds a charisma that warrants Grade II listing with Historic England.

The house was built in 1846 by John Rogers, a virtually unknown architect and builder, living in Alderley Edge. He was born at Ardley Hall, Essex, in 1799 and at some stage migrated to Cheshire where he built Bollin Tower for his family.

As anticipated the house has been owned by several people, the most conspicuous being Thomas Coglan Horsfall (1841-1932), a ‘civic saint’ who moved here in the 1870s.

Horsfall was the son of William Horsfall, a wealthy cotton manufacturer with interests in Manchester and Halifax. He was educated at private schools in Manchester and Bowden and his move to Bollin Tower corresponded with a partnership to his father’s Bridgewater Street business. He was never the healthiest of men was often absent which allowed him to progress his philanthropic work.

He was especially interested in educational reform, particularly with aesthetic teaching in elementary schools. Horsfall had struck up a friendship with John Ruskin, the art and social critic, and the two regularly corresponded. When Ruskin opened a small museum at Sheffield in 1875 to display his collection of art and minerals it inspired Horsfall to follow suit. In 1877 he created the Horsfall Museum, intended to be primarily educational with paintings, drawings, casts and pottery. The museum, now known as the Manchester Art Museum, moved to Ancoats Hall in 1886 where a nature study room was opened as well as a room about the history of Manchester. It also provided a children’s’ theatre.¹

His marriage to Francis Emma Reeves, the daughter of Henry Wilson Reeves, in 1878 resulted in the purchase of Bollin Tower and the birth of three daughters. Alongside his charitable work he also became a town planner, magistrate and a published author. He wrote The Study of Beauty and Art in Large Towns in 1883, both with an introduction by John Ruskin. This was followed up with The Relation of Town Planning to the National Life in 1908.²

Thomas Coglan Horsfall died in 1932 at Toutley Hall, Wokingham, aged 91. Not bad for a man with feeble health.  The Manchester Art Museum closed in 1953 and the contents were transferred to the Manchester Art Gallery.

At the start of the 20th century Bollin Tower was owned by Asa Hardy and the house also contributed to his eventual ruin.

Hardy had set up a business as a fustian manufacturer and dealer in dyed goods with William Welsh at Little Lever Street in Manchester. This partnership was dissolved in 1890 and continued as Asa Hardy and Company, specialising in the making of fine velvet.

For a time the business flourished but a series of calamitous events led to its collapse. First was the defalcation of accounts by one of Hardy’s cashiers. The employee had presented balance sheets showing a large credit balance and absconded when it was discovered that £6,000 had been filched. The company was also entangled with another accounting fiasco after it supplied goods to the Eden Manufacturing Company. On delivery the stock was quickly sold on by an errant employee who pocketed the money. He also fled leaving Asa Hardy to chase up payment for goods never received by the unfortunate recipient. To make matters worse, the company suffered further losses when a firm of drapers, McLachlan Bros of Montreal, failed with liabilities of £140,000. Among the creditors was Asa Hardy and Company.³

Next was an ill-advised investment in the Grand Trunk Railway of Canada. Hardy had gambled on the differences in the railway’s shares and when they bombed ended up considerably out of pocket.

If Asa Hardy thought he might seek solace at Bollin Tower, bought at great expense, he was mistaken. The value of the house had drastically depreciated when dry rot was uncovered resulting in costly rebuilding work.

In the end the financial losses proved too much for Asa Hardy and he was forced into bankruptcy in 1903. His company had liabilities of £20,216 and, with the textile industry in a depression; he had reached the end of the road.  Hardy, however, was quickly discharged from bankruptcy when the miserable circumstances were found not to be of his own doing. But, the judge was quick to point out, he could see “no difference between gambling on American railway shares and gambling on the horses”.

Despite the outcome Bollin Tower had to be sold and was bought for a modest price by Edwin Taylor Butterworth, a rag trader, operating at Pollard Street in Ancoats.

By the 1950s the house was now owned by the Sellars family. Graham Dilliway lived nearby in the former coach house of Croston Towers, another castellated house that was demolished at the end of World War Two :-

“Bollin Towers, the last remaining castellated house on the Edge, was occupied by the Sellars family. Mariel Sellars and I were able to communicate at night by flashing our bedroom lights on and off. Bollin Towers was later divided into two, with the Sellars family retaining the “tower” portion of the house. The division deprived Mariel and me of a long polished hall, where we could ride on a small wooden train. I remember going up some greasy wooden steps to the very top of the tower, and having one of the very best views in Cheshire.”⁴

With the house divided into two properties the house has been sympathetically renovated and improved upon during the 21st century. In 2017, the west portion of the house was placed on the market with a guide price of £950,000.