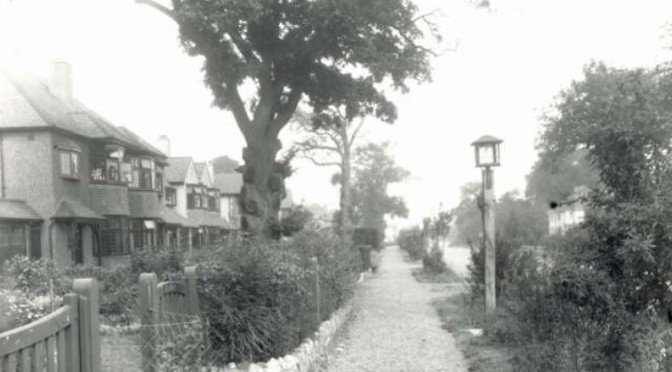 A country colony for Londoners: A house that became part of the ‘garden city movement’. Three years later it was lost

On Monday 6 January 1913, the members of Park Langley Golf Club were shocked to find that their club house was on fire. The blaze had started about eight o’clock at night in the dining-room, the cause unknown, and quickly consumed the interior, including the fine Adam ceiling.

On that cold January evening firemen from Beckenham and Bromley rushed to Langley Park. They laid their hoses to the pond 300 yards away and frantically pumped water into the house. By midnight the fire had consumed most of the building and by first light on Tuesday it was evident that only the outer walls remained.

The remains of Langley Park were demolished soon afterwards and a replacement club house constructed nearby.

Previous to this, Langley Park mansion, standing at the centre of Langley Park in Beckenham, Kent, had been an age-old family home. Parts of the house were said to date back from 1476, built for the De Langele (Langley) family, although the main part of the property was Georgian. The Langley family remained until the 1820s when it was bought by Emmanuel Goodhart. In total, there were twenty rooms, many containing valuable objets d’art, Adam fireplaces and about twenty sepia frescos.

After the death of its last occupant, Emmanuel’s son, Charles Emanuel Goodhart, D.L., J.P. in 1903, the property had been empty. However, with one eye on the advance of London, there were plenty waiting patiently to exploit Beckenham’s rural location.

The estate was sold by the excecutors of Charles E. Goodhart in 1908 and 700-acres of its parkland bought by H & G Taylor, a Lewisham building firm, to build a new ‘garden estate’ – Parklangley –‘the most luxurious and beautiful attempt at town-planning in the country’.

The initial phase (1909-1913) was based on the ‘garden city movement’. The layout of the estate and most of the houses were designed by Reginald C. Fry, but there were other designs from Edgar Underwood, H.T. Bromley, Sothern Dexter and Durrans & Groves.

The first roads to be laid out were Wickham Way, Elwill Way and Hayes Way in 1909. Malmains Way, Whitecroft Way and Styles Way followed in 1910. The golf club moved into Langley Park in 1910, occupying the house and remaining parkland.

Originally envisaged as a self contained garden city complete with circular shopping centre, church and dance hall building, around 80 houses had been built before the development was interrupted by World War I.

Work resumed on the ‘garden city’ in 1918, but the scheme never fully materialised. However, consisting mainly of sizeable detached and semi-detached housing it remains ones of Beckenham’s most exclusive and unspoilt areas.