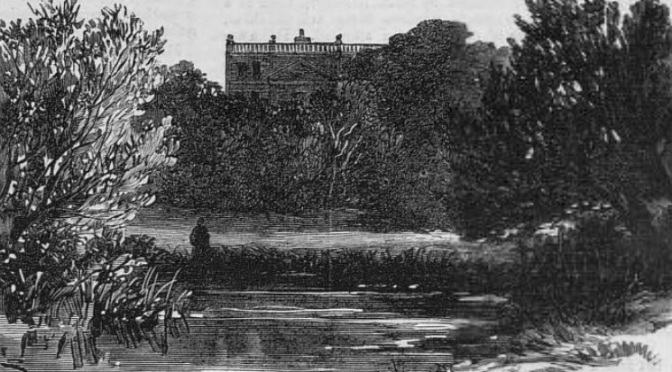 Today marks the 100th anniversary of an important and interesting five-day sale of the ‘magnificent surplus furnishings’ at Belvoir Park, Newtownbreda, near Belfast. It was an indication that times were changing for this country house… and not for the better.

The estate, once called Ballyenaghan, had once been the home of the Hill family, named so it is said, by Michael Hill’s wife, Anne Trevor, subsequently married to Lord Midleton, owing to the view (belle voir’) and in part to her childhood recollections of Belvoir castle in Leicestershire. She was responsible for creating the grand mansion and it is suggested used the German architect Cassells for the design.  Her son, who became Viscount Dungannon in 1766, inherited the estate before it was sold in 1809.

It was originally bought by three Belfast merchants – John Gillies, Robert Davis and William Blacker – for £35,000 – until it was bought by Robert Bateson, a Belfast banker and landowner, in 1818.

Decline set in after the death of Baron Deramore. For a time, it was occupied by Walter H. Wilson, a shipbuilder and partner in Harland and Wolff’s. It was his widow that instigated the sale of its contents in 1918. Its last resident was Sir James Johnston, Lord Mayor of Belfast in 1917-1918.

Belfast was quickly growing, and the estate which had once stretched to more than 6,000 acres, was now only a few miles from the city centre. It falls into the category ‘swallowed by suburbia’; the land was more valuable than the house and was prime residential development.

In the 1920s parts of the estate became a golf course and at one time it was suggested that Belvoir Park might be used as a residence for the Governor of Northern Ireland (Hillsborough Castle was chosen instead).

Belvoir Park stood empty until 1934 when the building company, W.J. Stewart, leased the building and land. The obvious motive was to build houses on the estate, but this was scuppered by the outbreak of war. The Admiralty requisitioned the house during World War Two as a temporary armaments depot and built over a hundred nissen and elephant huts.

Afterwards, it was handed back to Stewart and Partners and used for the storage of building materials.

From the 1950s Belvoir Park was in serious decline. Empty, derelict and populated only by its by ghosts, the estate was sold to the Northern Ireland Housing Trust in 1955. 150-acres of former parkland was leased to the Forest Service and became Belvoir Park Forest, while the rest was used to build much-needed housing.

Belvoir Park was blown up by the Army, presumably as part of a training exercise, in 1961. The site of the Georgian mansion is now used as a car park.