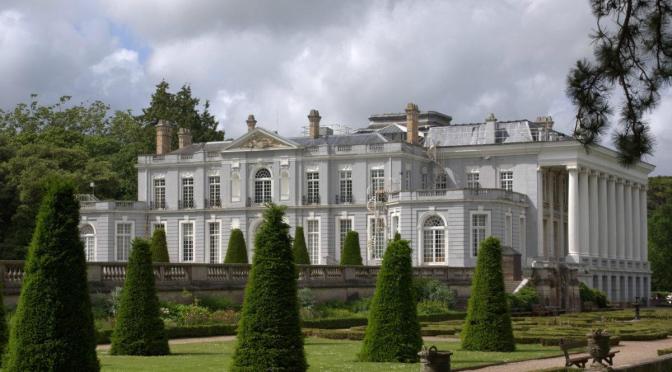 Built by the Singer family to take advantage of Devon’s mild climate and cosmopolitan society. One hundred years after use as a military hospital it faces an uncertain future.

On the day that The Victorian Society has released their Top 10 Endangered Buildings List 2018, we take a look at Oldway Mansion at Paignton, the only country house to feature on this year’s listing.

One hundred years ago, life at Oldway was very different, if not more traumatic. American women were rendering generous and greatly appreciated help here to the wounded Allies’ forces, the house renamed as the American War Hospital. It was one of the finest and best-equipped in the whole range of Red Cross undertakings. Mr Paris Singer, who was well known as a skilful aviator, had given over his palatial residence with its hundreds of rooms and beautiful grounds, an ideal home for the wounded. Dr Penhallow was the chief surgeon, and a staff of over a hundred and fifty nurses carried on the work under Colonel Gunning.

This glorious house of 1873 was built by George Bridgman as a private residence for Isaac Merritt Singer, founder of the Singer Sewing Machine Company, and later rebuilt by his third son, Paris Singer, in the style of the Palace of Versailles. Following the end of an affair with dancer Isadora Duncan in 1917, Paris Singer went to live in the United States. Oldway Mansion became the Torbay Golf & Country Club in 1929 and was bought by Paignton Urban District Council in 1946.

Following many different functions during the later 20th century, it was used as council offices from 1946 until 2007 when the council announced its intention to sell the building as it had become too expensive to maintain. This proved controversial with residents who wished it to continue being a public space. In 2012, plans for the building to be converted into a luxury hotel and sheltered retirement flats were approved by the council, but works never started. In 2016 there emerged a legal dispute between the developers and the council over the leases, which developers claimed had caused the delay on the redevelopment. This heated legal dispute ultimately brought an end to the planned development, leaving the council once again with the issue of how to proceed with the empty listed building.