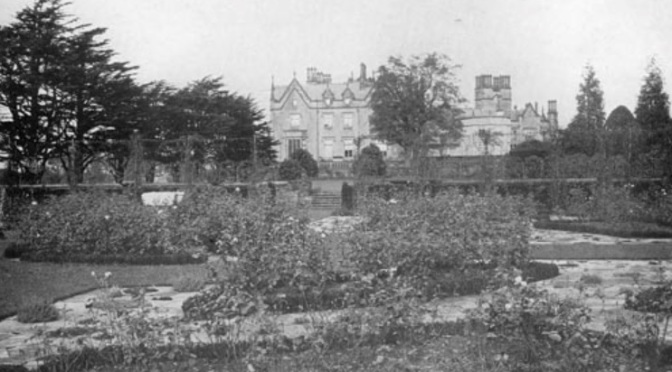 January 1919. Lilleshall House is going to auction. These days we know it better as Lilleshall Hall, a famous name in English sport.

One hundred years ago, a notice appeared for the sale of Lilleshall House in Shropshire. The selling point for the property was that for many years it had been the home of the Dukes of Sutherland. However, by this time, the house was surplus to requirement. It had been sold privately for £45,000 in 1917, and was now being offered for £20,000. At the June sale it became the property of  Sir John Leigh for the next few years.

Sir John Leigh, 1st Baronet (of Altrincham) (1884-1959) was a British mill-owner, who used his fortune to buy the Pall Mall Gazette and launch his career as a Conservative Party politician. He had made his money in the Lancashire cotton industry and was made a baronet in 1918. He was rumoured at the time to be worth £14 million. He was elected as MP for the Clapham division of Wandsworth at a by-election in May 1922, and held the seat until he retired from politics at the 1945 general election.

The Lilleshall estate’s origins went back to the 12th century when Lilleshall Abbey , an Augustan foundation, was built. After the Dissolution of the Monasteries the land was awarded to James Leveson, a Wolverhampton wool merchant in 1539. The estates later passed to Richard Leveson, a distant cousin who was a prominent Royalist in the English Civil War and fortified the Abbey, inviting a severe bombardment. As he too failed to produce heirs, Lilleshall then passed to Sir William Leveson-Gower, 4th Baronet, founder of an illustrious political dynasty, who married Lady Jane Granville, daughter of the Earl of Bath.

An existing mid-18th century mansion at Lilleshall was considered too small, but it was not until the 1820s that George Granville Leveson-Gower instructed the architect Sir Jeffry Wyatville to start work on the present house. It was completed in 1829, four years before the newly elevated Duke of Sutherland’s death.

In 1914, a year after George Granville Sutherland-Leveson-Gower (1888 -1963), 5th Duke of Sutherland, had succeeded to the title, he decided to break up his estates. During his father’s tenure there were several properties, including Stafford House at St. James’s, Trentham Hall in Staffordshire, Tittenson Chase, Stoke-on-Trent, Dunrobin Castle and the House of Tongue in Sutherland. Trentham Hall had been offered to Stoke-on-Trent Council, but it had refused it, and was subsequently sold to contractors for demolition.

The identity of the 1917 purchaser was shrouded in mystery. The Tatler reported that Lilleshall House had gone to “a great north country munition millionaire who hails from Birmingham.” By October, his identity had been revealed as George F. Heath, head of George Heath Ltd, automobile engineers and motor car dealers.

Whether he intended to live here or not is a matter of speculation, or perhaps he sensed a quick profit on his investment. But, by the end of  1917, George Heath had unexpectedly put Lilleshall House back on the market.

The House went to auction in 1918, but failed to sell. A years later, in 1919, Lilleshall House did find a buyer, this time it was Sir John Leigh.

“Estate-selling proceeds apace. Lilleshall and the Sutherland family are no longer connected, except as a memory. Sir John Leigh is the owner of the Duke of Sutherland’s Shropshire property, and so another ‘stately home of England’ has changed hands. There are no better specimens of Elizabethan architecture in the country than Lilleshall, where King Edward was a frequent guest when the beautiful wife of the late Duke was one of the hostesses for invitations to whose entertainments Society itself was not ashamed to scramble. The place is rich in historic associations, and it is therefore satisfactory to know that Lilleshall Abbey, a gem of Norman architecture, will still be open to the tourist and antiquary, and Sir John has already announced that he has no intention of curtailing any of the privileges hitherto enjoyed by the public.” – The Sketch, June 1919.

Lilleshall House was sold in 1927 to Herbert Ford (1893-1963), a local man with a shrewd eye for business. He’d acquired his wealth from the industry of the Ironbridge Gorge and from a wealthy wife, who was a member of the Lea and Perrins family, famous for their Worcestershire Sauce.

Like many others before him, Herbert Ford believed that Lilleshall House might make money for him. Although resident in the house he turned the estate into a tourist attraction, and from 1930 until 1939  the hall had pleasure gardens for the public, including an amusement park, a narrow gauge railway, tea dances, and children’s playgrounds. There were even motor-cycle races in the grounds. He added an additional nine holes on the existing nine-hole golf course, designed by the noted golf course architect, Harry Colt, which later became the Lilleshall Hall Golf Club. However, it was not played on for 20 years owing to a rent dispute with farmers that resulted in cattle on the course. He even increased attendance by advertising that the German airship Hindenburg would fly over the estate even when its route was nowhere near; he explained that the lack of an airship was due to bad weather in a self-sent telegram.

The pleasure gardens closed at the outbreak of World War Two and the house and parkland were occupied by the Cheltenham Ladies’ College and later Dr Barnardo’s, who used the facilities as an orphanage.

When war ended, Lilleshall House faced a precarious future. The house had fallen into decline and the cost of repair was far greater than Herbert Ford could manage. In 1949 he sold house and 10 acres for £30,000 to the Central Council of Physical Recreation who wanted to build a National Recreation Centre for the north of England.  The sale was made possible by the ‘Aid to Britain’ scheme, sponsored by South Africa, a financial gift to Clement Attlee’s government.

It was probably about this time that Lilleshall House became better known as Lilleshall Hall, although the house had been called both names over time. Ford later gave the facility an extra 10 acres of land, on condition that his family could stay in a flat within Lilleshall Hall for at least another ten years or until his death. He passed away here in 1963.

During the 1960s, Lilleshall’s connection with Association Football brought the centre to the attention of the nation. The England team trained for two weeks at Lilleshall prior to their success in the World Cup of 1966.

The centre passed to the Sports Council in 1974 and many different sports established Lilleshall as their own national and regional coaching centre. The Football Association’s School of Excellence was established at Lilleshall in 1984 and closed in the summer of 1999. Today, Lilleshall Hall is operated by Serco Leisure Operating Ltd on behalf of Sport England, as one of three National Sports Centres, alongside Bisham Abbey and Plas y Brenin.