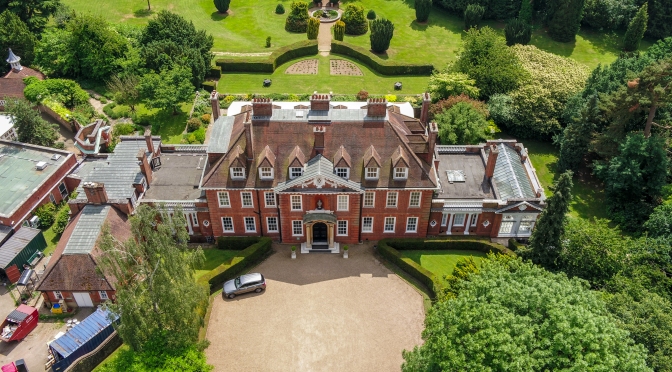 By the 1970s, Hazelwood House was empty and ready for demolition, perfect for film-makers wanting a miserable location. All these years later, and a change of name, this is a thriving country house hotel.

The 1970s were a bleak time for the English country house. Take, for example, Hazelwood House at Abbots Langley, in Hertfordshire. In 1970, the rambling mansion was empty, typical of many similar properties, but it caught the attention of film director Bryan Forbes who chose it as the principal location for ‘The Raging Moon’.

The British film starred Malcolm McDowell and Nanette Newman (Forbes’s wife) and based on a book by Peter Marshall. One critic described it as ‘romance in wheelchairs’, considered unusual because of the sexual nature of the relationship between its two lead characters in a church-run home for the disabled.

Hazelwood House was used as the care home. The photography was miserable. The snowy winter scenes complement the austere atmosphere within the house, but it was a true reflection of society back then. ‘The Raging Moon’ had a depressing ending, but it reflected the darkness and gloom permeating from the Edwardian mansion. Take out the actors and this would have been a big, cold and draughty house, with broken windows and leaky roof.

Sad times, but Hazelwood House’s depressing appearance had already made it functional as a film location for Sam Wanamaker’s ‘The Executioner’ (1970) and several Hammer House of Horror productions. Much later, it would feature in a different and much happier kind of creation, ‘Harry Potter and the Prisoner of Azkaban’ (2004).

It wasn’t an old house in the 1970s, built in 1908 on the site of an older property, but its history had been intriguing.

In 1810, Henry Botham (1749-1825), a wealthy Londoner, had bought 42-acres of land in the Hertfordshire countryside, subsequently acquiring a further 30-acres from the Earl of Essex, to create surrounding parkland in which to establish his country residence. Hazelwood House was most likely completed by 1812. Following his death in 1825, aged 76, it remained home to his widow, Lydia Payne, until her own demise in 1838.

The estate was bought by Sir Henry Robinson-Montagu (1798-1883), 6th Lord Rokeby, the second son of 4th Baron Rokeby. He had been commissioned into the 3rd Foot Guards in 1814 and fought at Battle of Quatre Bras and Battle of Waterloo as a 16-year-old Ensign in June 1815. At the outbreak of the Crimean War he was made a Major-General and commanded the 1st Division. He was married in 1826 to Magdalen Crofts, the young widow of Frederick Crofts and daughter of Lt-Col Thomas Huxley, and later took the title of 6th Baron Rokeby of Armagh on the death of his elder brother in April 1847. He also owned agricultural estates at Eryholme (North Yorkshire) and Denton (Northumberland), Cambridge and Kent.

Henry died at the age of 85 on 25th May 1883 at Stratford Place, London, and was buried in Clewer churchyard. The peerage became extinct on his death.

Hazelwood House was bought by Admiral Ralph (Peter) Cator (1829-1903), the son of Peter Cator of Beckenham, Kent, and nephew of Major-General William Cator, CB, former Director-General of Artillery and of Vice-Admiral B.C. Cator.

Ralph Cator had entered the Navy in 1843 and was present in the Rodney in the attack of the forts of Sebastopol, in October 1854, and for some time commanded her tender, the Danube steamer. In the latter vessel he served in the early part of June 1855, with the flotilla in the Sea of Azoff, where he assisted in destroying a vast accumulation of stores belonging to the Russian Government, and displayed merit which he was mentioned with praise in the dispatches of the senior officer. On the nights of 16 and 17 of June 1855, prior to the unsuccessful attack made by allied troops upon the Malakoff and Redan, the Danube was engaged in pouring a shower of rockets on the town and sea defences of Sebastopol.

As Senior of the Furious, Cator was attached to the Naval Brigade, at the storming of the city of Canton in December 1857, on which occasion he assisted in burning the houses in the vicinity of the North Gate, a service executed under a sharp fire and with considerable difficulty, the houses containing little inflammable matter. His conduct during the operations against Canton was brought to the notice of the Commander-in-Chief, Sir Michael Seymour, by whom he was again mentioned for his services on shore while belonging to the Calcutta, at the destruction of the Chinese fortifications at the entrance of the Peiho River, in May 1858.

Cator received the Crimean medal and Azoff and Sebastopol clasps, the Turkish medal and the Medjidie. He was promoted Naval ADC to the Queen from 1879 to 1882, from which he was appointed Rear Admiral, and was the inventor of an ‘alarm buoy’, which was approved by the Admiralty and supplied to the fleet.

In 1896, Hazelwood House was acquired by Reverend Henry Steuart Gladstone (1856-1929),  ‘a tall, spare distinguished-looking man of serious aspect, though his disposition and manners were pleasant enough’.

Gladstone had been the Curate of Fawley and was the Vicar of Great Barton, Suffolk, between 1886 and 1897, and the Vicar of Honingham, near Norwich. He was the husband of Mary Cecil Elizabeth Wilhelmina Gage, daughter of Lt-General Hon. Edward Thomas Gage, Governor of Woolwich,  whom he married in December 1882. Most notably, he was the cousin of William Ewart Gladstone, the Prime Minister.

He first leased the house to various London gentlemen, amongst those being Lord Roberts, its proximity to Ascot being an attraction. However, in 1907, he decided to live in the house himself, spending over £1,000 on renovations only to see the house gutted by a large fire which occurred on the 8 March 1908.

The family pictures were saved but little remained of the house.  Assisted by an insurance compensation of £10,500, Gladstone rebuilt Hazelwood House, using the architects Hubbard and Moore, similar in appearance to the first, but sited at a different angle to the ornamental grounds. The mansion that we eventually saw in ‘The Raging Moon’ was built in Queen Anne-style, in brown-red brick with lighter red brick, stone and white painted wood dressings, with a hipped tiled roof.

The house was almost immediately sold to Francis Edwin Fisher, a substantial landowner, farmer, meat wholesaler and businessman who frequently travelled the world with his wife, the explorer and journalist, Violet Cressy-Marcks.

During their absences the house was left empty or rented out, most notably to the Emperor Haile Selassie of Ethiopia (1892-1975), an exile from his country after the invasion by Italy in 1936.

Back in England, Francis Fisher and his wife spent most time at their townhouse, in Princes Gate, South Kensington, London. The outbreak of World War Two provided a unique opportunity for Hazelwood House when it became the wartime offices for Illustrated News Ltd and Odhams Press. Bruce Ingram, the editor of The Illustrated London News (from 1905) and The Sketch, had run his company for years and realised that wartime bombing  posed a threat to their offices at Inveresk House in Aldwych, London. Throughout the war years readers were instead encouraged to write to the Illustrated News’ temporary offices at Hazelwood House. His publications were regarded as the ‘Great Eight’ publications and also included The Sphere, The Tatler, The Graphic, The Illustrated Sporting and Dramatic News, The Bystander and Eve.

Part of the estate was taken over by the Ministry of Defence for production of Mosquito and Halifax aircraft.

Francis Fisher retained ownership of the estate until the late 1950s. Hazelwood House went through various uses, but stood empty for long periods, except for brief appearances on the big screen, until 1971.

Later, Paul Edwin Hember, the owner of several small businesses, bought the house and changed its name to Hunton Park, a name still associated with it today. The mansion’s fortunes changed for the better, eventually becoming the Hunton Park Hotel, part of the De Vere chain, until bought in 2017 by Ravi Ruparelia, a London-based hotel and catering businessman.

Before we leave Hunton Park, it is worth reminding ourselves of that piece of former parkland acquired by the Ministry of Defence during World War Two.  It became Leavesden Aerodrome and the former aircraft factories were used by Rolls- Royce to manufacture helicopter engines until 1993.  At its peak in 1990, the airfield handled some 60,000 aircraft movements and remained open until 1994.

In 1995, the site was purchased by Third Millennium Group and part of it used to create Leavesden Film Studios. The 80-hectare studio complex is better known now as Warner Bros. Studios, Leavesden, also home to the ‘Warner Bros. Studio Tour London – The Making of Harry Potter’.