This country house was once the English home of the exiled King Manoel II of Portugal. It was swallowed by urban development and eventually lost.

On this day, one hundred years ago, events in a distant country brought an English mansion into the headlines. Newspapers reported that the ex-King Manoel, who had been forced to flee from Portugal in 1910, and lived in England, had been proclaimed King of Portugal in Porto and other places by monarchist elements in his country.

However, the press also reported that Dom Manoel had condemned any attempt to restore the monarchy, even suggesting that he had refused the throne.

These were troubling times for Portugal. A monarchist revolt was spreading through several towns in the north of the country, while a Royalist Government had been formed in Porto, with Senor Paiva Couceiro at its head. The Government, however, claimed to be master of the situation.

Away from the unrest, enquiries by journalists at Dom Manoel’s residence at Twickenham were told that “he was not at home.”

Fulwell Park, where ex-King Manoel had lived since he brought his bride to Britain, was an historic mansion, built mainly in the Georgian style. A part of it dated back to James II, but it had been considerably enlarged from time to time, and now contained a magnificent suite of six entertaining rooms. 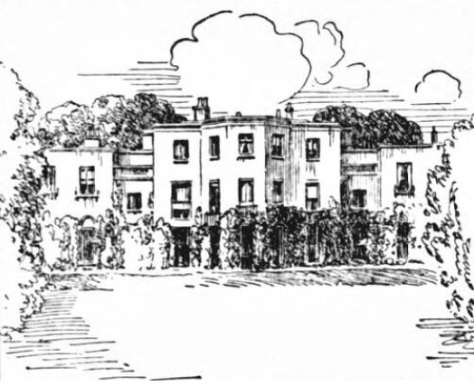 Fulwell Park had been the home of many famous people, and Twickenham itself abounded with historic memories. In 1800, Orleans House had been the residence of Louis Philippe, then Duke of Orleans; and among other famous inhabitants of the area had been Alexander Pope, Horace Walpole, Francis Bacon, John Donne (the poet), Kitty Clive (the actress), Tennyson, Dickens, Archbishop Temple and Henry Labouchere.

The mansion was built in 1623 and was acquired by Sir Charles James Freake, a London property developer, in 1871 and renamed Fulwell Park from Fulwell Lodge. It passed to his wife Eliza in 1884, then after her death in 1900, to Count Reginald Henshaw Ward , an American millionaire, born of an English family.

Count Ward was born in Massachusetts in 1872 and had been a clerk in a Boston bank at seventeen. He eventually started banks of his own in Boston and New York, and by the time he purchased Fulwell Park, he was a representative of Clark, Ward and Co in England. Ward was also known as ‘The Copper King’, in reference to his large business interests in the copper market. The bachelor moved into Fulwell Park in 1903 and took himself up to the city every morning in one of his five splendid automobiles. His title of Count, by the way, was of Papal creation.

As the years progressed, Ward spent months away from Fulwell Park and by the time it was sold to Manoel in 1913, had been used as a residential country home for paying guests.

Dom Manoel (1889-1932) was the second son of Don Carlos, the King of Portugal, and his wife, Marie Amelie, daughter of the Comte de Paris. She had been born at York House, Twickenham, in 1865. Manoel was born in Lisbon in 1889, barely a month after his father had succeeded to the throne.

King Carlos I and his eldest son, Luiz, were both assassinated in 1908. 18-year-old Manoel, training as a naval cadet, succeeded to the throne as Manoel II, but his reign was brief, a revolution broke out in October 1910.

Manoel and his mother fled to Gibraltar, and from here to England. They settled at Abercorn House in Richmond in early 1911. Manoel married the German Princess Victoria Augusta of Hohenzolern in 1913, and on their return to England settled at Fulwell Park. King Manoel had a liking for the area, and was already a well-known figure in the Richmond, Teddington and Twickenham neighbourhoods.

One of the attractions of Fulwell Park was the nine-hole private golf course laid out in the grounds. But the chief attractions were charming grounds of some fifty acres, where there were shady lawns, extensive flower gardens, peach houses and vineries. There were also several tennis courts in the grounds, especially agreeable for a man who excelled at the game. There was also good fishing in the River Crane, on which boating was also possible.

Manoel found solace in his books, and in his library,  he built up a unique assembly of ancient Portuguese works, and then, to show he was no mere bibliomaniac, proceeded to write an authoritative book on them. It was his hobby and life’s work, shared only with his love of grand opera and watching lawn tennis at Wimbledon and on the Riviera.

Manoel had an aversion to the colour blue, and he made sure that the decoration at Fulwell Park excluded any shade of it. The drawing-room was redecorated in rose shades, while a delicate pink was to be found in his wife’s boudoir.

In July 1932, Manoel attended Wimbledon. The following day he suffered a sore throat, a doctor was called, but he died of oedema of the throat.

Manoel left English property valued at £26,447, and to King George V he bequeathed two large vases of lacquer with the Royal Arms of Portugal, which had been in the dining room at Fulwell Park, “in testimony of profound gratitude for all his kindness and friendship.”

His widow left Fulwell Park in December 1933 and took up residence at Fribourg in Switzerland. King Manoel’s collection of books was sent to Portugal, and his widow sold the house in 1934, with an undertaking that it should never again be used as a private residence. The house was sold to Edward Wates, a building company, and soon demolished to make way for suburban housing. A four-ton safe that was used to hold the Royal jewellery at the house is now in St Mary’s Church, Hampton.

The names of Manoel Road, Augusta Road, Portugal Road and Lisbon Avenue in Twickenham commemorate the royal residents. The original housing has since been supplemented by a great deal of infilling, but the legacy of Fulwell Park is long forgotten.