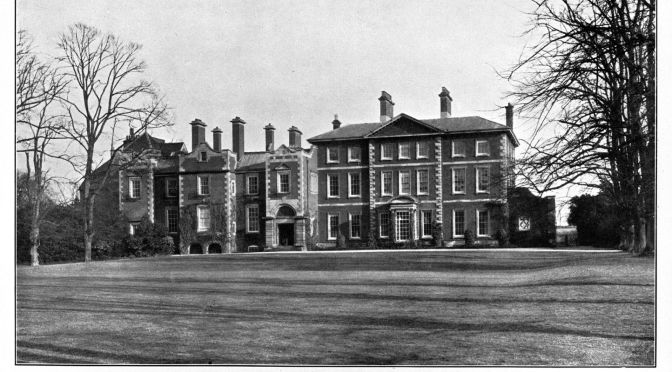 Lord Glanely is probably best remembered today as a noted racehorse owner, whose horses won all five Classic races of the British turf. However, he made his money in shipping.

Exning House was built by Francis Shepheard in 1734 to the design of the mason, Andrews Jelfe. From that time, it was occupied by the principal landowners in the village. It was at the centre of 1 700 acres estate and from the early 19th century was set in an extensive park.

The Shepheard family were wealthy landowners, possessing several manors and much property, sufficiently for the illegitimate daughter of Samuel, the surviving brother of Francis, to be described as an heiress, and win the hand of Charles Ingrham, one of the many sons of Lord Arthur Ingrham of Temple Newsam in Yorkshire.

The estate was sold in 1794 to John Dobede, chairman of the Newmarket Bench and a senior magistrate in Cambridgeshire and Suffolk, whose son, Henry F. Dobede, restored and enlarged the hall. In 1881, the house was auctioned and sold to Mr Fenn of Newmarket, representing the Stewards of the Jockey Club, for £165,000. It was deemed an important purchase, being adjacent to the race-course, and suitable for accommodation purposes. When the Prince and Princess of Wales visited Newmarket for the July meeting in 1882, it was here that they stayed.

In 1883, Exning House, along with its gardens and grounds, was let to Lord and Lady Carcross. They remained until 1891, at which time the Jockey Club put a portion of the Exning estate up for sale, including the mansion itself. The sales catalogue described it as ‘a mansion of handsome and classic design in red brick, with stone facings and Corinthian portico, situate in a finely-wooded park’. At the auction, it sold for £32,500 to Mr Morton, a London solicitor, acting on behalf of Captain Edward W. D. Baird, a retired officer of the 10th Hussars. Baird had a keen interest in horse-racing and was the eventual owner of Woolwinder, which won the St Leger in 1907. He became Major Baird after accepting a temporary rank in the Imperial Yeomanry in 1900, later attaining the rank of Colonel.

Colonel Baird made several improvements at Exning House, but a serious fire in April 1909 damaged the property. The outbreak originated in the upper portion of the new north wing, where, in addition to about twenty servants, the nurseries, governess’s and housekeeper’s apartments were situated. Several rooms were gutted, and so serious was the outlook that a large body of men started removing the valuable contents, completely emptying the house and placing them in the park. The blaze destroyed the north wing, built in 1893 for £15,000, and Colonel Baird and some of his helpers had sustained several injuries. The house was rebuilt using the architect Philip Webb to alter and extend the property in 1896.

When the Bairds moved to their London home in 1913, the Exning estate was put up for sale and purchased by Lord St. Davids.

William James Tatum, 1st Baron Glanely, a Cardiff shipping magnate, philanthropist, and thoroughbred racehorse owner acquired Exning Hall and the Le Grange Stable in Newmarket sometime before 1920. Born in Devon, the son of Thomas Tatem, who died the year he was born, the young William, aged 12, signed on and sailed on a voyage around the Cape Horn. He later entered the office of a Cardiff shipowner, gradually building up his own business, and was described as ‘a cabin boy to millionaire’. Tatem was created a Baronet in 1916, and two years later rose to the peerage. Between 1919 and his death in 1941, his horses won 6 Newmarket Classic races. In June 1942, after taking a summer house in Weston-Super-Mare, he was killed in a German air raid on the town

After his death, Exning House passed to his nephew, George Cock Gibson of Lanwades Hall in 1948, who put it to use as a home for the elderly, along with a cash donation of £10,000. Known as Glanely Rest, the house was later abandoned until converted into three separate properties.

Exning House is Grade II* listed because of the rare, almost complete example of a country house by Philip Webb. In September, 2018, it is on sale at Strutt & Parker with a guide price of £1.55 million.